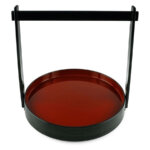 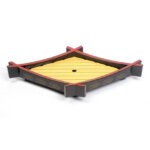 Coming Soon. Want to be notified when this product is back in stock?

The Shokado 6 Compartment Bento Box is perfect for serving traditional Japanese influenced meals in restaurants or at home. Conveniently designed with six divided sections to prevent food from mingling.

This stackable 6 Compartment Bento Box is made of easy-to-clean BPA-free ABS resin and is finished in a two-tone red and black Color Masterbatch. Easy to clean, simply wipe clean with a soft damp cloth and towel dry.

Traditional lacquerware Shokado 6 Compartment Bento Box was was originally fashioned of wood, was inspired by the Edo period and Kyoto. The Shokado is designed to resemble a storage box, which was once used to store tobacco and calligraphy equipment. Modern Japanese cuisine arose during the Meiji Era when Japan opened up to the outside world and is characterised by rice-based foods such as tempura, tonkatsu, and sukiyaki.

The Katachiware Shokado Large Bento Box is the perfect blend of elegance and functionality. It is made of a sturdy, long-lasting material that will last for many years. It can be used to keep food warm or cold on the go. The bento box is ergonomically built to fit in the palm of your hand and also looks fantastic on display. View our full range of Large Bento Boxes. View our collection of bento boxes.