Bento Box History begins in Japan, early in the Kamakura Period. Today bento boxes are one of the most common packaging types used for takeaway’s, frozen meals, lunch boxes for work or school, and for serving delicious Japanese inspired meals at home or a restaurant.

Bento (弁当) boxes come in many shapes and sizes; some include a single compartment, others 4-5 which traditionally contained a serving of rice or noodles with fish, meat or chicken and the main course was accompanied by cooked or pickled vegetables. Today bento boxes are mass-produced in disposable plastic and available in bamboo, camphor wood, ABS resin plastic with a melamine coating and wood hand-crafted in a lacquerware finish. In Japan, bento found in railway stations, department stores and fast-food shops that specifically serve bento meals.

Bento can be traced back to the Kamakura Period (1185-1333). Japanese packed their lunch to take to work, hunting, fishing, or waging war they carried parcels of packed food to eat the go. These portable meals would commonly include foods such as white rice, millet or potatoes.

Bento boxes have a long-standing history in Japan and the term “Bento” first mention of it is found in the 1603 version of the Japanese-Portuguese Dictionary and comes from a Southern Song dynasty term “biàndāng” which means convenient. Referring to the meal with the box they first appeared in their most basic iteration towards the end of the 12th Century, Kamakura Period (1185-1333) where the cultural tradition of pre-cooking rice and storing it for later use by travellers and working-class was discovered.

Although they were not named bento, the idea became quite popular because it allowed people conveniently transport small compact meals in and eat on the go wrapped in small packed sacks made of leaves, wickerwork baskets or furoshiki (wrapping fabrics). Dried white rice called Hoshi-ii (糒) was prepared as a dried meal and taken to work the land, fishing, or hunting. Warlords would pack their meals in bento to be taken at war to take up arms against other provinces. The rice would be eaten for lunch in its dried format or later have cold-boiled water added to make a rehydrated cooked rice with other ingredients added such as millets, potatoes, or slated vegetables.

Historical records by Nihon Shoki’s Chronicles of Japan mentions that falconers would use their feed sacks to carry their lunches or dinners in as they went out hunting for wild animals.

Bento continued to be widely used in the 16th Century Azuchi-Momoyama Period (1568 – 1600) for transporting cooked and dried rice for eating on the go. It is said that the term “bento” can be credited to Samurai Warlord Oda Nobunaga, a powerful lord and historical figure who contributed to the unification of Japan. He presumably popularised the concept of bento by distributing thousands of simple meals to the people stationed in his castle and were described as simple meals that were distributed in this manner.

A growing trend that is still found today of wooden lacquered bento boxes was thriving during this period and considered as luxury items solely for use by the upper class in Japanese society. Bento was elaborately prepared and eaten at tea ceremonies, theatre intermissions, entertaining and hanami bento (cherry blossom viewing parties) and were also available in Jubako Bento “Layered Bento Boxes”. They were elaborately decorated and equipped with small dishes, chopsticks, tiny cups for drinking sake and napkins along with an assortment of delicious culinary offerings.

The elaborately decorated glossy bento boxes aimed to provide a visual feast of colour to complement the delicious foods being served on offer. Nobility treated the bento box much more than a meal; it was a holistic experience designed to reward all the senses.

The Edo Period (1603–1867) was a peaceful and prosperous time, and bento culture continued to advance and became a part of everyday life. The Japanese people considered bento an essential accompaniment to outdoor excursions, travellers, tourists, sightseers and the general public would carry simple waist bento “koshibentō” (腰弁当) that would include several Japanese rice balls “onigiri” (おにぎり) that were encased in a woven bamboo box.

During this period a new type of bento made its first appearance, called makunouchi “between-act bento” (幕の内弁当). Spectators watching Noh and Kabuki (live theatre) were treated specially prepared bento meals during intermission or between acts “maku”. Foods served consisted of lavish assortments including rice sprinkled with sesame seeds and a wide variety of side dishes, including fish or meat accompanied by egg, cooked or pickled vegetables, and umeboshi a salt pickled plum.

Due to between-act bento being so popular Japanese chefs published books dedicated to preparing meals served in bento. Still surviving today published in 1643,  Yori Monogatari, Accounts of Cooking includes recipes for grilling venison, wild-hare, boar, raccoon and even dog. Photo on the left is the Quick Guidance for Cooking by Ryori Hayashinan.

Well into the Meiji period (1868–1912) Japan’s bento box history continues, the railway systems were introduced and long train rides made it hard to carry takeaway foods, so a new type of bento box arrived. First sold in the 16ht of July 1885  ekibentō or ekiben bento (駅弁当 or 駅弁) which translates into “train station bento” was sold at the Utsunomiya Train Station in the northern region of Japan, Kantō, Tochigi Prefecture. The meal included takuan with two onigiri rice balls finished with an umeboshi filling wrapped in bamboo leaves to keep it fresh. Ekibentō became so popular that it spread to railway stations all over Japan and in the summer of 1888 the first standard ekiben was sold at the Himeji Station.

Due to its convenience bento continued to grow, schools did not provide students with lunch to carry bento on the way to school and teachers and general workers. Simultaneously, the bento movement started to become popular in European countries, but they usually consisted of stacks or take-away sandwiches.

Today in Japan there are literally thousands of different types of ekibentō still sold on platforms or in the tray which are generally presented in elaborate containers used as souvenirs for the train riders.

During the Taishō period (1912–1926) Japan was a fast-growing country with unprecedented prosperity and along with that came the demand for new products. Materials such as Alumite, an aluminium alloy became a viable material for making way for products to be made out of new materials, including bento boxes. Made from aluminium bento boxes were expensive to purchase and considered luxurious items as they had a silver-like appearance, light, durable heat resistant and easy to clean.

After the World War, the distinction between the wealthy and poor became evident across Japan due to a boom in exports and repeated crop failures. The poor were hungry, yet the wealthy could afford the most expensive items, including aluminium bento boxes.  This caused a move in schools to eliminate bento boxes as they were a social issue reflecting the student’s wealth. Bento boxes made from aluminium were affordable to wealthy families and were treated as a status symbol with an assortment of elegantly prepared nutritious foods. Compared to the simple homemade bento that included a few leftovers or roughly prepared meals many questioned if bento boxes had an unfavourable impact physically from the lack of a nutritious diet and psychologically from the state of their lunch boxes. Eventually, bento boxes were banned in schools, decreasing their popularity until many years later when plastic was used. 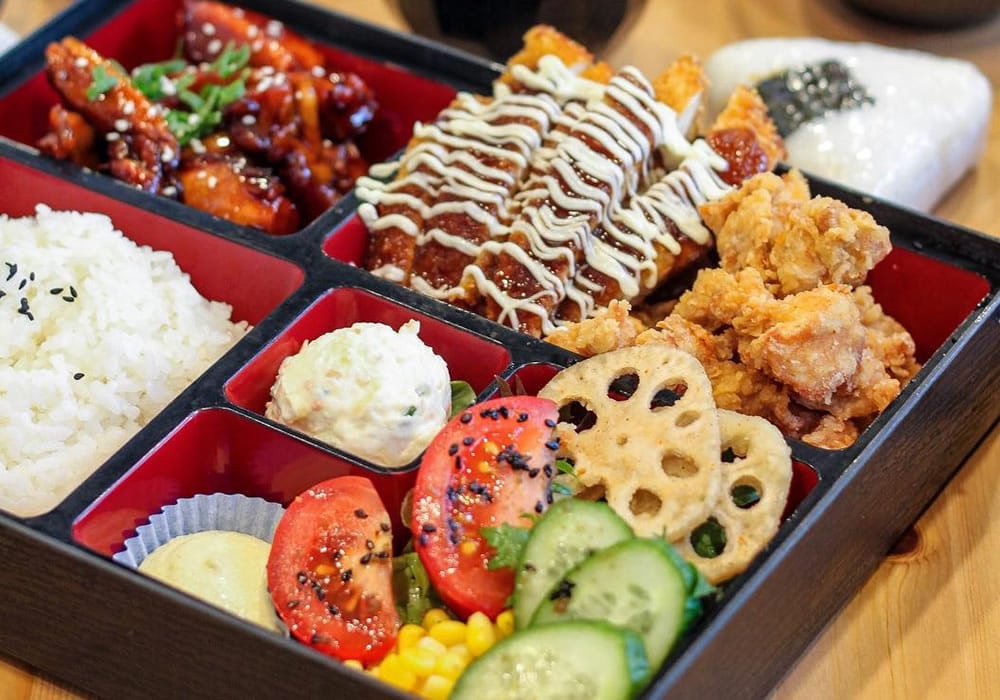 Fast forward 50 years, bento boxes recaptured popularity in the 80s. Wood and aluminium bento were replaced with disposable plastic bento boxes due to the abundance of convenience stores and supermarkets serving inexpensive takeaway meals and TV dinners. Bento became an affordable and convenient way to satisfy your hunger with a lowcost delicious meal that took minutes to prepare.

Microwave or TV dinners are ready-made pre-packaged meals made in mass production generally sold as a frozen dinner stored for weeks or months until ready to be eaten. Foods are packaged in a portion-controlled bento tray and usually enough for one person. Most popular in Canada and the United States they would include the main course of meat, chicken or fish accompanied by vegetables, potatoes and a few side dishes

Traditional home-made bento boxes made a comeback in a small way. Still, they were mainly prepared on special occasions or for westerners wanting to experience an authentic Japanese meal cooked at home or restaurant.

Today bento boxes are used for almost all packaging purposes. Made of absorbance of many materials including plastic in many forms, aluminium, wood, bamboo, recycled materials and much more. Available in many shapes and sizes they are used for serving fast foods, microwave oven dinners and Japanese or Korean prepared meals at home and restaurants. Also used for general purpose packaging for almost anything you can buy off the shelf at your local supermarket. Also used to serve meals whilst travelling on a plan and astronauts used bento trays to eat their meals from.

For those with a little patience, preparing bento can be arranged in an elaborate way called “kyaraben” or character bento. Lunches prepared with foods that look like anime, manga or cartoon characters. Also popular in Japan is “oekakiben” which translates into picture bento. An arrangement of food that looks like famous people, family members, pets, buildings, cars or famous monuments. Read more about kyaraben here: Kyaraben (Character Bento).

The bento box history has gone a long way and it will be interesting to see where it will lead us in the near future.

For more information on the bento box history along with types and usage, visit the Wikipedia article on bento boxes: Wikipedia