We are extremely excited to announce that the highly anticipated and exclusive to Katachiware the Limited Edition Kizoku Bento Boxes & Genji Motif is finally in production and due to land at the end of July 2021.

The new bento box is made from a BPA Free, food-grade ABS resin and measures 300mm x 240mm x 58mm. It includes five compartments and the design emulates the Edo period designs with a tray using a natural wood-grain patterns. The colours are gold and brown with the traditional crimson red and black insert.

This bento box is a great choice for those who love serving food with a sense of Japanese elegance and tradition in mind. Also great as part of an ornamental piece or gift for a loved one. 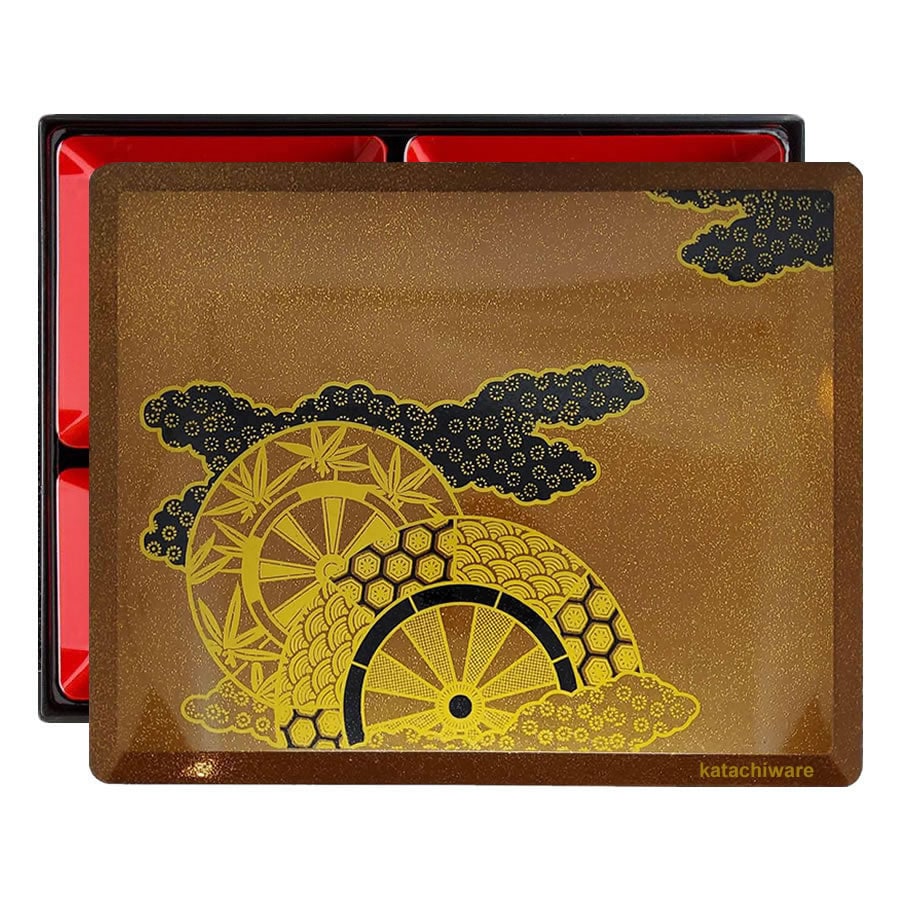 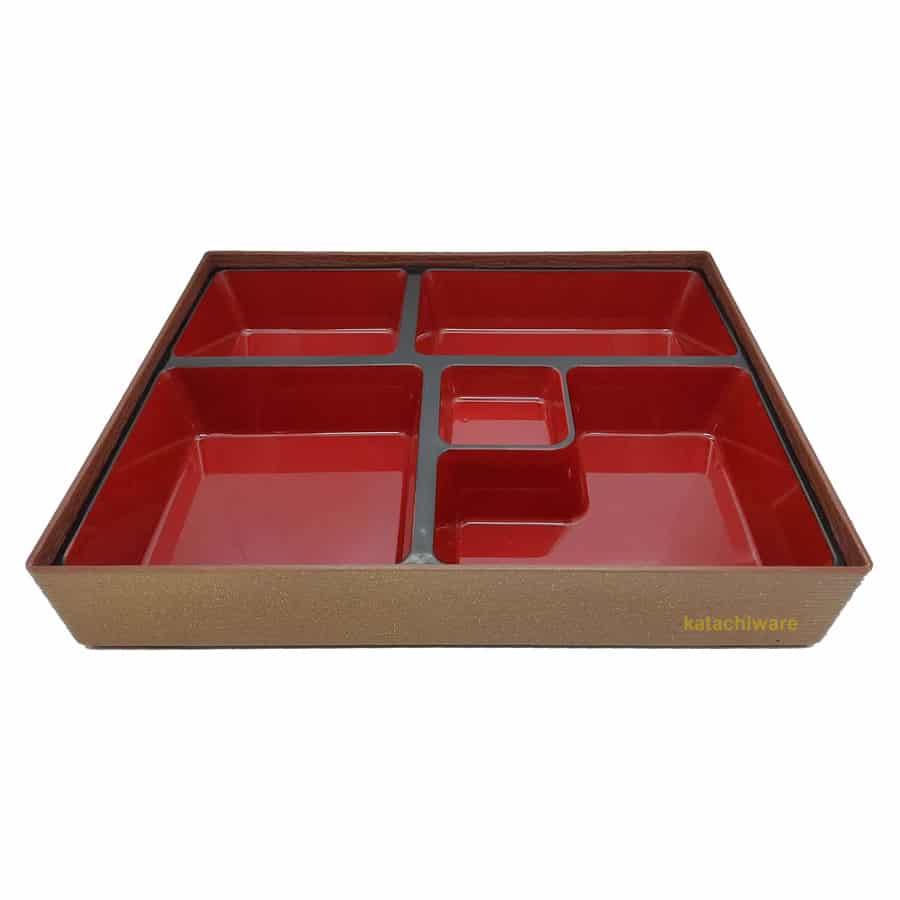 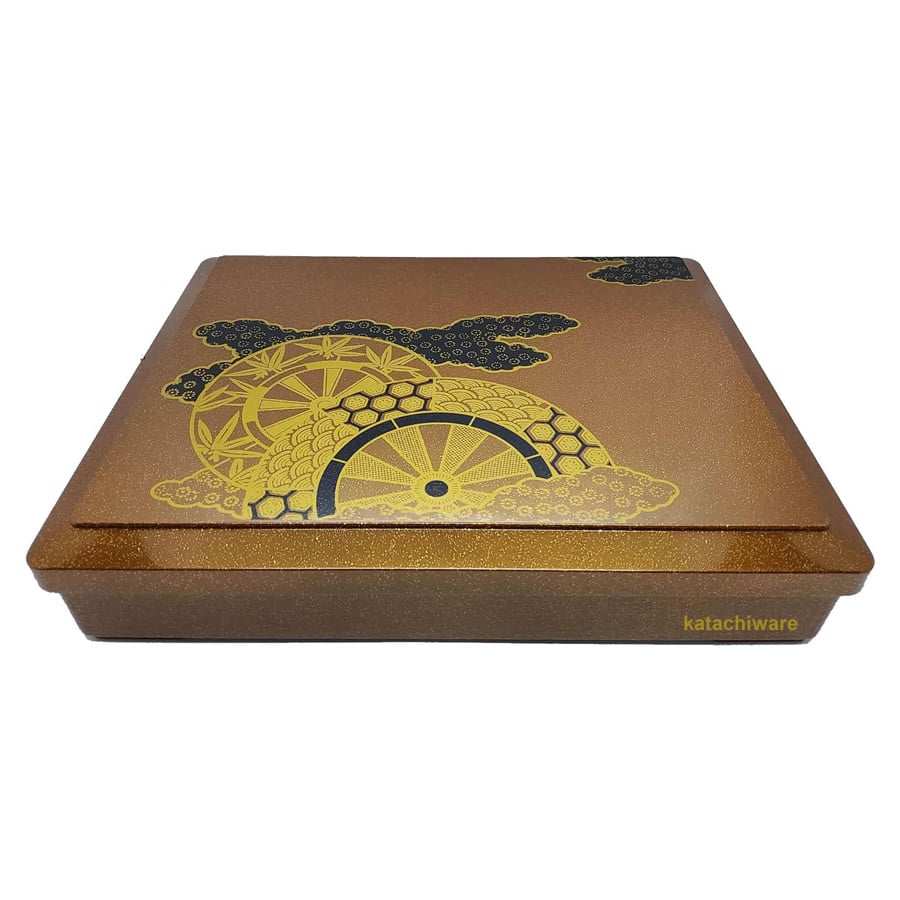 The Edo Period Golden Kizoku Bento Boxes with Genji Motif lends its inspiration from ancient Japanese tradition that is woven into the nation’s long and fascinating history. Between 1624 and 1830, the Edo period’s food culture achieved numerous peaks, with advancements in both culinary culture and nutritional practices, according to cultural history.

Carriage Wheels: Genji-Guruma: also Genjikuruma – The wheels of the Gosho-guruma (Imperial carriages) became decorative motifs, their name Genji-guruma derived from Genji, the protagonist in the first-ever novel, The Tale of Genji (which was written in 11th century Japan). Only Kizoku (nobility and aristocrats) from the Imperial court was allowed carriages with such huge wheels (because they did so much damage to roads), found on carriages pulled by oxen, so these wheels signify the nobility and court life and good fortune. If they have eight spokes they also often refer to the Wheel of Dharma, a symbol that represents the teachings of the Buddha.

Clouds: Genji-Gumo: Also spelled Genjikumo, Kumo meaning cloud. One of the cloud-shaped kimono patterns. This is named after cloud designs drawn in the famous Japanese tale, “Tale of Genji”, reputedly the first novel ever written. Clouds are often included in artistic scenes referring to the Heian Court because courtiers were referred to as “those who live among the clouds” (Kumo no Uebito).

Gold: In the Edo period, gold was used extensively in decoration as it symbolised wealth and prestige. “Since ancient times, spotless, untarnished gold and silver have been coveted as symbols of wealth and power and the Japanese tended to value its beauty in the dim reflections of gold leaf applied to pieces of art and daily items. The sweeping gold background gives the work depth and richness.

Kizoku: During the Edo period, Kizoku denoted people whose social privileges were widely acknowledged as a result of their bloodlines or family positions, as well as their clans. This term could also be used to denote their social standing which was primarily inherited, although few people were promoted to Kizoku for the first time because of their outstanding accomplishments.

Today Kizoku Bento Box sets are available for all to enjoy and no longer limited to those with social privileges.

Most popular foods in Edo

Soba noodles (served in soba trays standing at roadside stalls), sushi, and tempura, all introduced by the Portuguese, were the most popular meals in Edo. Seaweed, fish, clams, shrimp, octopus, and whale flesh were among the many items harvested from the sea. Pre-modern Japanese diets did not include red meat, and they did not become popular until the Meiji Era.

Rice was a common food and was used to determine wealth (samurai stipends were given in rice). A favourite roadside snack was rice cakes covered in big leaves. Nobles favoured polished rice, whereas samurai ate husked rice. Farmers ate millet even though they cultivated rice. Sake, a rice by-product, was the most popular drink among the samurai. Consumption of alcohol was widespread among the samurai class, and inebriation was not frowned upon. At a drinking party, it was once considered rude not to become intoxicated.

Read more about where the concept came from, Japanese Wiki Corpus.

400-Year-Old Japanese Cuisine | What did they Eat?

Learn How To Drink Sake from a Japanese Master Chef