Are you a Japanese food lover? If yes then you must be used to using Japanese Chopsticks which have become so synonymous with Japanese cuisine that originated in a country other than Japan. The following article traces the history of this unassuming yet very significant dining tool which has gained worldwide acceptance and helped to experience Japanese dining at its best.

What does the term Chopsticks mean?

Chopsticks in Japanese are called ‘hashi’; it is a homophone and its meaning is ‘bridge’. The idea in earlier times was that chopsticks acted as a bridge between man and god. The belief held was that offering chopsticks to a deity led them to be occupied by that deity. And when the food included in the offering was eaten by the individual, man and god dined alongside one another.

Over the years, chopsticks in Japan gained a prominent place at the dining table as it acted as a bridge between the mouth and the serving vessels during the daily meal. Every family in Japan has a personal pair of chopsticks kept separate for each of their members and may have more than a pair for special occasions.

When were Japanese Chopsticks introduced?

The earliest instance of chopsticks usage can be traced to around 1200 B.C. They originated in China and gained entry into neighbouring provinces around the 5th century.

They were used first as a form of cooking utensil due to their advantage of conveniently reaching into the deep bottoms of pots. Stirring and serving food was their main usage rather than being used as an eating utensil. However, it was not very soon that they gained a place of importance at the dining table. This was the time when the milling of wheat flour became known to people and food items like noodles and dumplings became popular food preparations.

Cooked rice too became a staple ingredient of the diet and chopsticks formed a convenient eating tool for consuming the sticky rice preparation in Japan.

Though the country of its origin was China it was Japanese cuisine that ensured its widespread popularity across the globe. Chopsticks had spread to Japan, Vietnam, and Korea by 500 AD. Early Japanese chopsticks were constructed from one piece of bamboo connected at the top, like tweezers, and were only used for sacred occasions.

Another theory relating to the origin of chopsticks stems from the contempt of knives held by ancient thinker Confucius and it was he who advocated the use of chopsticks at the dinner table rather than knives. He felt that this way the violent influence of the knife could be banished from the dining table leading to a content and peaceful environment during the consumption of meals.

Over the years, different cultures have adopted many different chopstick styles and today there are the Chinese, Korean, Vietnamese and Japanese chopsticks having features unique to each other.

Chopsticks in Japan are used for consuming food or for ceremonies or for cooking. Accordingly, they are categorized into the following groups.

Regular Chopsticks: These chopsticks are commonly used in most Japanese households. They are typically made of wood and range from short to medium in length.

Waribashi/Disposable Chopsticks: Wrapped in plastic or paper-cover these are normally handed along with a take-out bento bought from a Japanese convenience store or inexpensive Japanese restaurants.

Iwaibashi/Celebratory Chopsticks: As the name suggests, this form of chopsticks are used to savour a Japanese festive dish called the osechi dish; a dish prepared to celebrate the New Year. Moderate length and a simple beige colour characterize this form of chopsticks which are normally enclosed in decorative paper cover and adorned with a symbolic embellishment called nori.

Saibashi: This chopsticks form serves as a cooking utensil. Their lengths are longer than regular chopsticks to incorporate the safety element which is needed while cooking or stirring foods in deep pots. Typically they are made of lacquered bamboo though other wood types may also be used.

Rikyuubashi: Another form of Japanese chopsticks that forms an important part of the traditional Japanese tea ceremony is called Rikyuubashi. These have rounded tapered ends with the mid-section squared off for enabling a firm grip. Normal chopsticks are tapered only at the end used for holding food. Rikyuubashidiffer from normal chopsticks in this respect. The tapered shape at both ends has a profound reason to it; it is supposed to act as a means of displaying gratitude to gods. One of the tapered ends is dedicated to the almighty while the other is for the individual.

Kuromoji: This form of chopsticks comes in varying lengths; the ones with shorter lengths are used to savour traditional sweets while those with longer lengths serve as regular chopsticks. They are, however, more craggy in shape and form.

Materials that go into Making Chopsticks

Japanese Chopsticks as are known to the average individual today are made of wood. But it was not so during the earlier years. Royalty in China used chopsticks made of silver as it was supposed to act as a defence tool against nefarious plots involving arsenic poisoning through food. The belief held was that silver would turn black in presence of arsenic in food. This was, however, a misplaced faith as silver changed colour even in instances of garlic and onion being present in food items.

Metal chopsticks are still found in some areas and precious metals like jade and ivory are used for the purpose. These are elaborately made and come for a great price.

Though there are chopsticks made from bamboo, polymer material, plastic or stainless steel; the common material used in producing chopsticks today is, however, wood. The wood needs to be comparatively hard and resistant to water. A wide variety of wood ranging from pine, chestnut, cedar, maple, sandalwood is used for the purpose. In Japan, the wood commonly used for chopsticks is a combination of fine boards of pine, cedar and maple and this is known as shuboku wood.

Chopsticks may just seem to be a pair of wooden sticks but they are an indispensable tool if you want to get the best out of Japanese cuisine. You, therefore, need to be aware of the right way of holding or handling them as you savour Japanese food.

Chopsticks may have come to Japan from another country but over the years the Japanese developed their own etiquette and rules while consuming food with them. Following guidelines have to be observed while eating food in a Japanese setting:

Some people may find the above-mentioned rules a bit too overwhelming. However, the least they can do is to avoid using chopsticks that indicate an association with the dead or a funeral. These are considered the most disrespectful of all and avoiding them will ensure you have a very pleasant dining experience.

Impact of Disposable Chopsticks on the Environment

Single-use or disposable chopsticks are largely used in countries outside of Asia as a convenient option for savouring Asian cuisine. However, their impact on the environment is immense with the major impacting outcome being deforestation. Forests are razed to source wood for the production of this single-use eating tool.  The wood is processed with hydrogen peroxide and paraffin during the production process for preventing the growth of mould; however, they become non-biodegradable and go on to add to the heap at landfills.

Alternatives to disposable chopsticks need to be encouraged. This will help to reduce deforestation on a large scale. One way is to encourage the use of reusable chopsticks made of plastic. Reusable plastic will still act as a good environmental alternative. Other ways include using connecting chopsticks which can be carried by the traveller along with him or using edible chopsticks.

On a Summarizing Note

Today, Japanese Chopsticks are used by around one and a half billion people across the world to consume their meals. Though a large percentage of this figure is concentrated in countries of the Asian continent, it is becoming an increasingly popular eating tool for people outside of Asia for savouring Asian cuisine in their own countries.

Found this article interesting? Why not read more about the humble chopstick history at wikipedia.com or take a moment to look at our collection of Chopsticks & Rests. 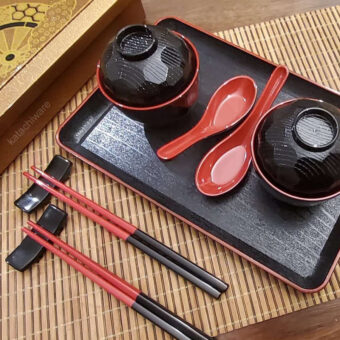