Traditional bento boxes are typically a Japanese lunch-box though today the concept has made its presence felt in every household worldwide. Distinct from the standard lunch box in the sense constituent, a perfect combination of varied textures, tastes and food ingredients.

An average Japanese meal packed into the bento box comprises rice, fish, meat, and pickled vegetables. The Japanese home maker uses every inch of space provided in the box to prepare and pack wholesome and nutritious meals for her family members. Following are the most common types of bento boxes available in Japan and around the world. Included are a translation of each bento box type from Japanese to English.

Koraku Bento translated into English is Picnic Lunchbox. As the name suggests, Koraku Bento boxes are made for sharing among a group of people at picnics, day outings and sports events. In March and April they are prepared and shared with a group of friends during the cherry blossom viewing festivals.

Similar to traditional bento boxes, Karaku bento ingredients used will normally include foods that are in season. Several servings of onigiri are triangular rice balls and maki sushi rolls “rolled sushi” wrapped in Nori or seaweed. Occasionally they are wrapped in a lovely thin omelette which gives the meal a different flour.

The term Koraku bento, when translated into Japanese refers to a ‘picnic lunch box’. It is large in size and made to accommodate a meal for a small group of people. It is popularly used during the spring season when many groups view the colourful cherry blossoms. The standard food menu in this box consists of Onigiri, which are rice balls shaped into triangles and makizushi rolls.

Makunouchi Bento translates into Between-Act Bento. As you can imagine, they have something to do with theatre performances, served during Noh and Jabuki “between the curtain” theatre performances dating back to the Edo period 1603-1867. While waiting for the next act, you were served with a lovely two-section meal to keep you occupied, and ingredients varied depending on the season and the act.

Prepared by a caterer, the two-section meals typically included a rice dish while the other side had small seasonal side dishes including Salmon, Pumpkin, Chicken, Rice with a Plum and Chestnut Rice. Many recipe books were published during this time, covering detailed instructions on preparing and decorating Makunouchi bento boxes.

This type of boxes is readily found on shelves of departmental stores, supermarkets etc. Sections are provided inside for holding rice dishes on the one hand and several side dishes on the other. Caterers prepare the meals packed into these, and they were originally made available in Kabuki theatres as meal servings for members of the audience or the cast members.

Hinomaru Bento translating to Japanese Flag Bento “circle of the sun” was bento traditionally made with steamed white rice and a pickled plum (Umeboshi) placed in the centre of the meal. The white rice and red plum symbolised the Japanese flag “The Rising Sun.” It was a popular patriotic menu item in Japan after World War II.

Its origin is associated with a Japanese initiative in 1937 in a girls’ schools located in the Hiroshima prefecture. The patriotic lunch was consumed by pupils each Monday as a token of solidarity while troops were fighting in China. By 1939 the idea was adopted by schools all over the country. It later years it rose to the symbol of wartime mobilisation and national unity. Read more: Hinomaru Bento (Patriotic Bento).

Hinomaru denotes the symbol and national flag of Japan. The meals that go into the box are elegantly simple, very becoming the national flag’s simplicity. A white rice base topped with one pickled plum to denote the sun and accompanied by a fish or meat side dish form the box’s constituents.

Shikaeshi Bento “Revenge Bento” or revenge lunchbox is certainly one that you would never hope to receive. This meal’s intention was so that a wife could give her husband a memorable and unpleasant surprise during his meal break. As the bento box was opened, the husband would find an embarrassing design or a box filled with nothing but uncooked rice or raw egg making the meal inedible.

Another example included a bento box with a bed of uncooked rice, sour pickled plum and the word baka or aho (idiot) written in seaweed. The message eloquently meant “Crime and punishment.”

An offshoot, the shikaeshi bento box, the Aisai Bento or “bento made by loving wife” is what it is. Bento box made with love from a wife towards her husband in the form of a delicious, nutritious, visually-appealing lunch box. Perhaps one of the greatest ways to say “I love you” while you’re away at work. Similarly, young women in relationships sometimes prepare a handmade bento for their significant other during the spring season.

The Aisai Bento Boxes tend to have nutritionally balanced ingredients in season and have cute colourful edible love messages. An example would be cooked rice, boiled egg, steamed broccoli, salmon with sauce, and radishes cut to look like love hearts and pickles.

Believed to be first sold in 1885, the Ekiben or railway bento is a specific type of meal sold at train stations across Japan that gives you a chance to taste the local cuisine without leaving the train station. They are commonly served in disposable plastic bento boxes and include utensils such as chopsticks, napkins and spoon. Ekiben bento boxes made from wood or ceramic are also sold depending on the region.

The term ekiben combines two terms; ‘eki’ meaning train station and ben referring to the bento box. These lunch boxes comprise top-quality meals popularly served on train compartments and railway platforms. The meals are complete in every respect with the menu reflecting the staple foods of the specific region. The lunch box is made of ceramic, wood or plastic and comes with a disposable chopstick set. This style of serving meals is common in other East Asian countries as well.

Homemakers often spend hours preparing these meals so that children are encouraged to adopt healthier eating habits. The idea of preparing meals to look like anime originated as a way to stop fussy eating in young children and make lunchtime meals more interesting.

Oekakiben Bento “picture bento” is an offshoot of Kyraben that includes scenes from cartoons, natural scenery, famous people, monuments, items, flowers or plants which can also reflect the season or a holiday. The meal normally includes rice and other colourful shaped items which encourage children to finish their nutritious meals without grumbling about it. Read more: Oekakiben (Picture Bento).

In the Edo period (1603 to 1867), the culture of the bento box grew in popularity and became more refined. Travellers and sightseers would carry a simple koshibentō, (“waist bento”), which consisted of several onigiri wrapped with bamboo leaves or in a woven bamboo box.

Obento (o-ben·to) has a cultural order and meaning; it is a particular type of Japanese lunch box that has been meticulously prepared by the mother for their child, including many small portions of carbs, veggies, fruit, treats and protein. The meal should be healthy, delicious, visually appealing and eaten in its entirety “no leftovers”. Obento preparation was a routine task, and cultural art form endowed with ideological meanings that were pleasurable and creative for both mother and child. Read more: Obento Lunch Box

Hanami Bento is the traditional Japanese custom of preparing a delicious bento boxed meals which are enjoyed while viewing the beauty of cherry blossom flowers from late March to early May. People enjoy viewing the blossom trees from south to north Japan with dance, sake and food served in bento boxes with divided compartments. By tradition, the colours of the foods prepared are pink, red and orange which is in honour of the coming spring. Alongside a serving of rice, you will find specialties of salmon, pink bream, shrimp, pumpkin or carrot recipes and sakura mochi which are traditional pink sweets made from coloured rice containing a red bean paste is wrapped in cherry leaves. Read more: Hanami Bento (Japanese Flower Viewing Bento).

Used in Japan during the Heian period (794-1185), Jubako Bento (重箱) means “Layered Bento Boxes”. Similar to bento boxes they are a combination of elaborately decorated lacquered boxes used for holding and presenting food in on outings or special occasions. The upper-classes traditionally used Jubako Bento to hold takeaway meals in for picnics, birthdays, celebrations and special occasions. They were stacked before and after serving the dinner and also used for holding Osechi-ryōri (御節料理) foods in for traditional Japanese New Year celebrations. Read more: Jubako Bento (Japanese Tiered Picnic Bento). 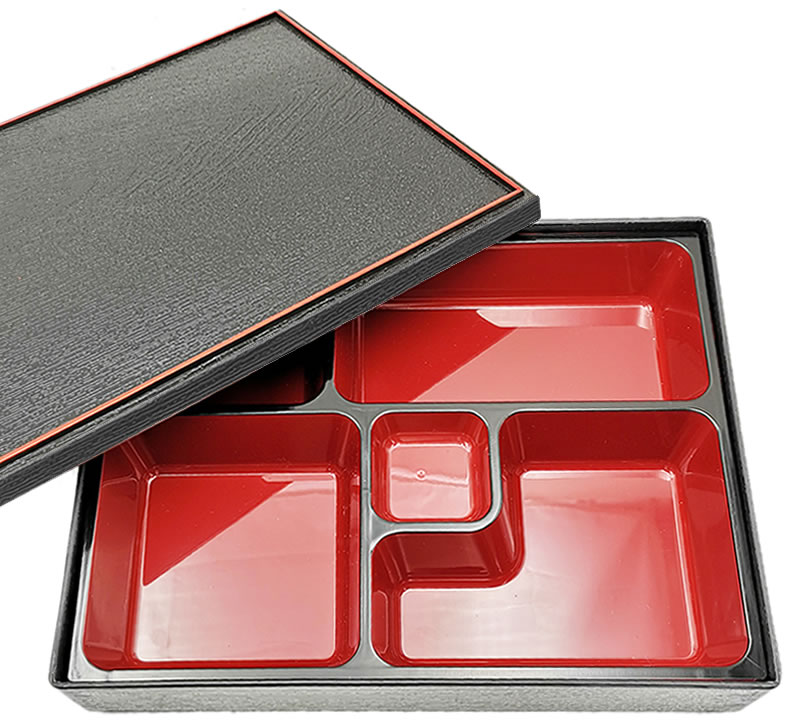